Difference between revisions of "Billboard" 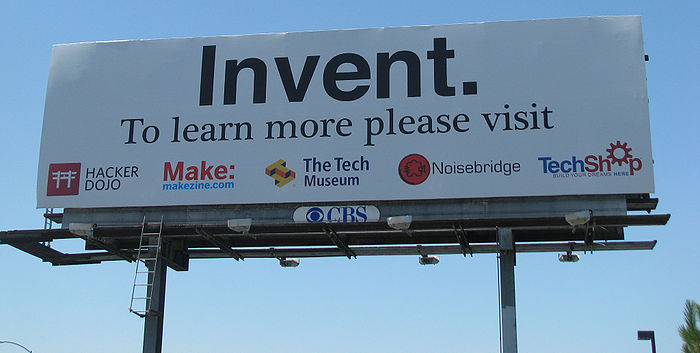 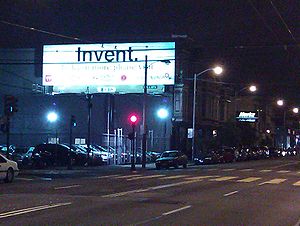 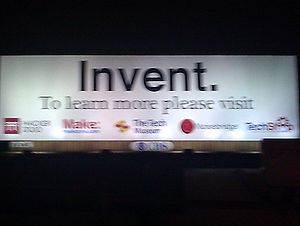 As a result of the campaign to put up billboards to promote hacker culture, enough money was raised to put up several huge billboards in San Francisco and San Jose!

These were paid for by Noisebridge, Hacker Dojo, The Tech Museum, MAKE Magazine, and TechShop.

These photos show some of the billboards (all are identical, and all are in high-profile locations):

The original appeal to raise funds for the billboards

Interested in helping get huge billboards up to promote maker/hacker culture?

I’ve been involved with talks with The Tech Museum, MAKE: Magazine, TechShop, and Hacker Dojo about getting billboards up to promote maker/hacker culture.

The person behind making this happen is Matt Spergel, who has some good experience in hacking the billboard system to get great coverage for cool projects. Matt managed to get a huge billboard up on I-680 to promote libraries and education for a few thousand dollars (rather than tens of thousands). The result:

FREE EDUCATION
and he got lots of great press for it.

Matt’s idea now is to have 3 huge billboards to promote maker/hacker culture, with the logos for Noisebridge, Hacker Dojo, The Tech Museum, MAKE, and TechShop:

The one on the skyway usually retails for $30K a month, but Matt’s contact/friend at CBS Outdoor can swing all of these for about $7,500. Each one will look like this mockup:

We are $1,000 short of this goal, and I agreed to try and raise this on Noisebridge’s behalf. The other groups have already come up with the following amounts of money for this project:

If a bunch of people each kick in a few dollars, we can easily come up with the $1k to make this happen. I’m starting this off by pledging $250. Anyone else in?

You can add your pledge to the wiki I created for this
or, just email me:
maltman23 *at* hotmail *dot* com

The billboard campaign starts on 25-July, so we have 2 weeks to reach our goal of $1k and make these 3 billboards a reality!

Objectives of the campaign

Please email me with any questions:
maltman23 *at* hotmail *dot* com