We are all familiar with the classic simple analog thermometer - the one with the resevoir of mercury or alcohol at the bottom. Unfortunately it is not very easy to convert the (optical) readings from this into a digital format so that we can datalog the information from our experiments. But with the Arduino we can take an analog electrical signal and turn it into a digital one that we can use. We have a number of choices so we need to choose the best ones for the BioBoard, where we'll be doing measurements on biological systems so the temperature range is generally the same as the one for liquid water. We want inexpensive, readily available, sensors that are easy to implement with the Arduino - and have the appropriate range, precision, and accuracy.

Some of the basic types of electronic temperature sensors include: 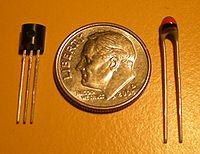 relative sizes of the two sensors

The thermocouple may be seem to be the most versatile - the individual sensors can be quite inexpensive (but to make your own can mean buying enough materials for many probes) and the range large - but the millivolt output requires an amplifier (~$18) to make them compatible with the Arduino, and they have a greater range than we need. RTDs are becoming increasingly common for some applications but require a bridge circuit, and are not as inexpensive or commonly available as we would like. We chose to focus on both the thermistor and the DTS because they cover the temperature range of choice well, they are inexpensive, and they can be implemented on the Arduino easily - you get two choices, just in case you have a preference, or one is more easily available than the other. The photo shows the 2 sensors that we interfaced (the DTS is the 3 wire one), but note that the digital sensor also comes in a smaller surface mount configuration, and thermistors can be as small as a grain of sand.

Since your temperature probe will be exposed to moisture or liquid water, it is best to encase it in a waterproof sheath - a good way to do it might be to place it in a plastic tube and seal both the thermistor/DTS end and the wires coming out the far end with silicone aquarium sealant. Leave the tip of the thermistor or DTS exposed, so that you will have a good response time.

The digital temperature sensor is the new kid on the block - it is a chip made by such manufacturers as Maxim/Dallas, Philips, and Texas Instruments, and is made to run off a voltage from 3 to 5.5 VDC, just like the Arduino puts out. We used the Maxim DS18B20 (Sparkfun and Hacktronics carry them for ~$4 but you can find them for less) and each sensor has unique 64 bit serial code stored in an onboard ROM - this allows you to use more than one sensor at a time. It is rated for the range -55°C to +125°C and has a stated accuracy of +/-.5°C in the range -10°C to +85°C. 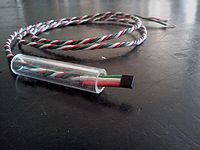 Assembling and waterproofing it

We've been using this very good, easy-to-follow DTS tutorial from Hacktronics - it'll teach you everything you need to know about interfacing with your DTS. We'll try to do the same, and also tell you how to waterproof your DTS for use in liquids.

First, you have to solder the wires to the chip; remember to pull the heat shrink on before you solder the joints. Keep careful track of which of your wires goes to which legs on the sensor! Next, string the piece of acrylic tube on the wires, leaving the sensor sticking out about 1" / 25mm. Fill the tube with glue, then pull on the wires to drag the sensor into the tube until the leads are fully covered.

A thermistor is a type of resistor which has a very well known dependence of the resistance on temperature, and the change is quite steep so that we can resolve small differences in temperature. We are using them in place of traditional thermometers, and so they are sometimes referred to a "resistance thermometers" - they are inexpensive, easy to find, and are very easy to interface to the Arduino. They are specified mainly by their room temperature (25°C) resistance and a common value is 10 kOhms. If many models are available, like from a major electronics supply house, you can also specify the tolerance and you can choose from different shapes and sizes (the size of a match head is good for starters). As well, there are two general types of thermistors - ones that increase in resistance with increasing temperature (PTC) and those that decrease in temperature with increasing temperature (NTC).

Besides your thermistor, all you need for the circuit is a "standard" resistor with a value that is the same as the room temperature resistance of your thermistor. You'll be using the standard one to build a "resistive divider" so that you can use the 5 VDC output of the Arduino and have good resolution over the full temperature range of the thermistor (usually something like -40°C to +125°C, perfect for biological experiments). For our examples we'll be using a 10kΩ NTC thermistor (Sparkfun and Hacktronics carry these) with a 10kΩ resistor for the bridge.

How to build it

Solder on wires and waterproof it as described for the DTS above.

On a breadboard build your simple resistive divider circuit, which looks like this. 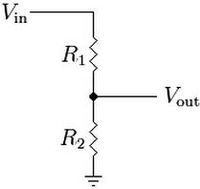 schematic for the thermistor temperature sensor

Things to keep in mind

R1 is the thermistor in the circuit, so your standard resistor (R2) is the one tied to the Arduino ground. When you buy the thermistor and matching resistor, buy ones with tight tolerances so that you don't have to worry about small errors in the temperature introduced by values which are off the stated values; and you might measure the actual values with a good digital multimeter, just to make sure. Take care when soldering, so that you don't expose the sensor to too high a temperature - you can fry it; before you waterproof, check the resistance one last time, just to make sure everything is still OK.

Remember that the Arduino has a digital output with 10 bit (1024) resolution so for the special case where R1 is the same as R2 (that's our situation at room temperature) the voltage will be half of the Arduino's 5 VDC, so we can expect the digital output to be 1024/2 or 512. The code looks like this:

and the math part is the Steinhart-Hart equation, which is the relationship between the resistance and the temperature for a thermistor with certain materials properties (see here for a description). On the manufacturer's datasheet for your specific resistor you will find a list of 4 materials constants - usually referred to as A, B, C, and D - that go with it. The most general equation is:

but check which one is appropriate for the material constants on your datasheet (the ones in this example are for Vishay thermistors which come from Sparkfun). 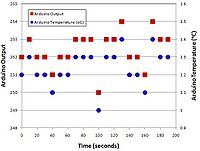 results when the thermistor is immersed in ice water

response time of the two sensors

example probes for the two sensors

Everybody needs to be convinced that your homemade instrument is reading what it should - it must be checked for calibration. Most of us only have two easily accessible, well known, temperatures in the biological region of interest that we can produce - the melting point of ice (0°C) and the boiling point of water (100°C, at sea leve)l - and these are good places to start. It can be helpful to use another reference temperature measurement technique which has already been calibrated, such as a commercial digital thermometer, in case or thermocouple (plus a reader for it - I use a Fluke instrument with an adjustable offset in case there is any error at your reference temperatures) is not available. This figure shows the results of a trial where I placed both the thermocouple and the thermistor in an ice+water bath (a double walled coffee mug) and recorded the Arduino output every 10 seconds - both instruments had an efective resolution of .1°C and we are looking at the noise at a fixed temperature.

It is not uncommon to see a peak-to-peak noise level of 3 times the resolution, and that is about what the experiment shows for both the thermistor and thermocouple. Note that for this experiment the Arduino output seems to be linear with the calculated temperature, and this what we expect for relatively small changes in temperature - if we are monitoring experiments where the temperature does not change much we can simplify the mathematical relationship between resistance and temperature, avoiding the calculation hassles of the Steinhart-Hart equation. The offset of ~1.3°C between the "Arduino temperature" and the expected value of 0°C -(the reference thermocouple does only a little better than this unless the 0°C offset voltage is very carefully tweaked - and remember that the literature indicates that we can expect up to about 1°C error due to instrument on-board cold junction compensation errors) - is likely because this particular thermistor only has a room temperature resistance tolerance of +/-5%. If measuring and then using the offset is not what you wish to do, you might have to buy one with a better tolerance and generally take extra-ordinary measures.

The DTS also showed an elevated temperature when in the ice bath - +2°C in this case. This time it is a little harder to understand, and because they are so new there is not much help out there on the web (and I doubt that the vendors have much real experience with them). With the software setting used it had a resolution of .25°C but this is user configurable (between 9 and 12 bits). In order to compare the response time of the two probes we can first immerse them in ice water then remove them and watch the temperature drift upwards towards room temperature - the results are shown in the figure on the right, and because of the construction method the sensor mass is very small compared to that of the probe. The two performed identically, but took ages to reach the new temperature - to get faster response you'll need to decrease the thermal mass of the whole probe significantly.

If we need to investigate the calibration over a narrower range we can play tricks like add ice to hot water and watch the temperature on both our Arduino output and our reference thermometer slowly drift up/down together - to see how your DIY measurements compare with the calibrated ones.

The acrylic tube we used for waterproofing the sensors is a little on the large size, partly because of the large gauge lead wires used - you can customize your specific raw sensor so that it is encapsulated differently and suits your application more closely. You might want to skip the tube method altogether, just waterproofing the sensor alone with something like epoxy.

If you want to hack just a little more then you might choose to use a thermistor that you find out in the world, using obtainium can be particularly satisfying - such as from a BBQ probe or other similar digital thermometer. These will have a to-be-determined room temperature (25°C) resistance and materials constants, so you will need to measure the resistance at at least 3 different temperatures (some people ignore the "C" constant, so 3 might be enough) and solve the multiple equations to get the constant values. Luckily, websites exist to help you with this process.