Difference between revisions of "Club Mate" 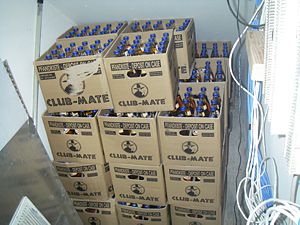 We normally order our club mate from Ferrymen (www.ferrymen.net). Our contact is Alex Rethwisch and they can be reached at alex at ferrymen dot net.

When we last ordered in 2018, it was $40 per case. There are additional costs for acquiring or renting a vehicle to cart all the cases to Noisebridge from their storage in Oakland.

There are two types of cases (both types are $40 per case):

The big one has much more Maté for the buck.

The 2700 Hacker Magazine group also sells Club Mate. Normally it's more expensive than ferrymen but once in a while they have a good deal if the Club Mate is going to expire soon.