From Noisebridge
Jump to navigation Jump to search
The printable version is no longer supported and may have rendering errors. Please update your browser bookmarks and please use the default browser print function instead. 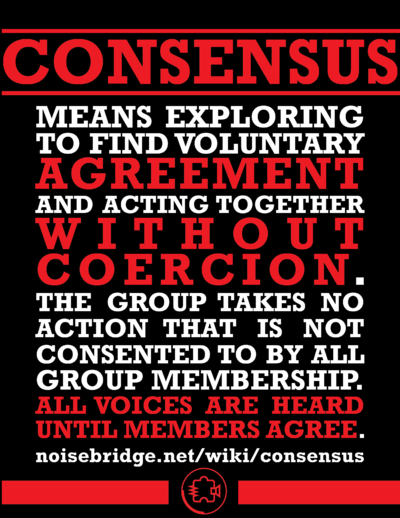 This section represents the consensus of Noisebridge. Do not edit it. If you wish to make changes, bring them up for discussion and consensus at weekly meetings.

Our Version of Consensus

Consensus is a non-violent way for people to relate to each other as a group. Successful use of a consensus process depends on people understanding the idea and wanting to use it.

Consensus allows us to recognize areas of agreement and act together without coercing one another (but see below *). Under consensus, the group takes no action that is not consented to by all group members.

* We wish to avoid revealing the impression that "real live discussion with real live human beings" are simply buzzwords for Noisebridge's own de facto brand of coercively extracting approval of Consensus items (steamrolling), e.g., through Social Pressure or other manipulative Social Engineering techniques.

Voting is a means by which we choose one alternative from several. Consensus, on the other hand, is a process of synthesizing many diverse elements together. With consensus people can and should work through differences and reach a mutually satisfactory position. It is possible for one person's insights or strongly held beliefs to sway the whole group. No ideas are lost, each member's input is valued as part of the solution.

Consensus clearly takes more time than a simple vote. But the added time can be viewed in relation to the increased understanding each member of the group will have about the issue and the increased probability of the decision being implemented.

What does Consensus Mean?

Consensus does not mean that everyone thinks that the decision made is necessarily the best one possible, or even that they are sure it will work. What it does mean is that in coming to that decision, no one felt that her/his position on the matter was misunderstood or that it wasn't given a proper hearing. Hopefully, everyone will think this is the best decision (*and see the above note regarding steamrolling*).

What is Required of Us

Noisebridge is run by consensus with all the members. We don't do anything as a group that everyone isn't OK with (not everyone has to be wildly enthusiastic). We've evolved a way of getting to this state, which is not any kind of definitive rule, but has worked reasonably well so far. Here's what to expect in most cases, except when we get to consensus by a different method.