Difference between revisions of "DreamworksReply"

Thanks for your letter asking for permission to use the Noisebridge logo on sticker and T-shirts in the forthcoming DreamWorks movie about Julian Assange and Daniel Domscheit-Berg. It must be very exciting to work on such a large project, especially when you need, as your letter says, clearance on our logo "tomorrow" (15th January). How many people you must have to constantly ask for such permission, just for a little bit of set dressing!

It is probably long past the point where you were going to use it anyway, but here is our reply:

From your description, it should be so patently obvious to anyone watching your film that you're just using the image to talk about Noisebridge, not claim you are Noisebridge or that Noisebridge supports your film*.

Noisebridge as a community believes you you have the right to use such imagery without having to ask permission from others -- especially those who you might be implicitly criticising or commenting upon. Such a right is encoded in the existing nature of trademark and copyright with the idea of fair use.

Sadly, all such free speech rights have been concealed over the years by the claims of copyright maximalists, who would have you believe that you must beg to refer to us in your film -- or event that you would be beholden to us if, for instance, you parodied our disrespectful attitude to your concerns with the following image, which includes both of our indentifying marks, the Noisebridge(TM) circuit, and the Unicorn Pissing A Rainbow(TM). 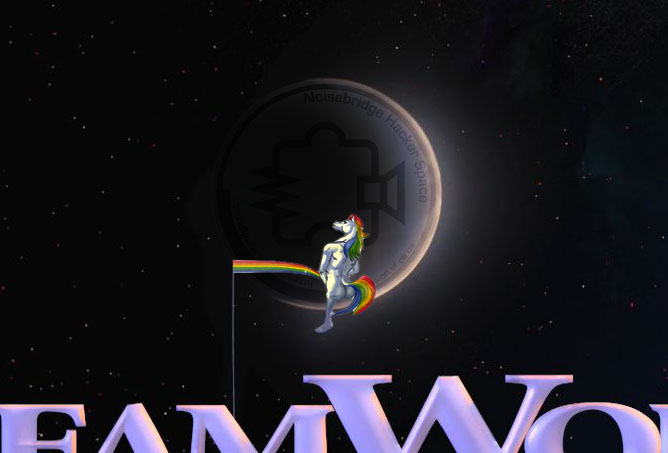 Such a position is lunacy and a genuine threat to free speech and the first amendment. You should use exercise all of your fair use rights freely, without fear.

So we say tell your friends at DreamWorks to publish (or print, or produce) and be damned. Tell them we fully support them in their brave stand, and can say, with confidence, that the only conditions in which we would sue them and their partners to the maximum damages entitled to us by law would be if it turned out that hackers like us were completely hypocritical nihilists, out only for our own egotistical ends. Given that you were so nice as to ask us, we can't imagine you think that of us, do you?

To Whom It May Concern,

I am a Clearance Coordinator working on the DreamWorks Studios feature film The Fifth Estate and Production is interested in using the Noisebridge.net name and logo on stickers as set dressing and/or on t-shirts as wardrobe.

I have attached a PDF containing a formal request letter, our standard release form, and an image of the name/logo. The letter explains what the film is about, who is making it, and how Production intends to use the name/logo.

If everything meets with your approval, please print the release form, arrange for signature and return to us, preferably, via email to XXXXX. Should you have any questions, concerns, or problems opening the attachment, please contact me at your earliest convenience.

If permission is granted, Production would need to print the stickers and/or t-shirt as soon as tomorrow to have them prepared for shooting. I apologize for the urgency and understand that Production's schedule is not your priority. Your immediate attention to this request is appreciated.

Thank you for your time and consideration. We look forward to receiving you response.