Welcome to Gamebridge Unityversity. If it's your first night, you will develop a game. 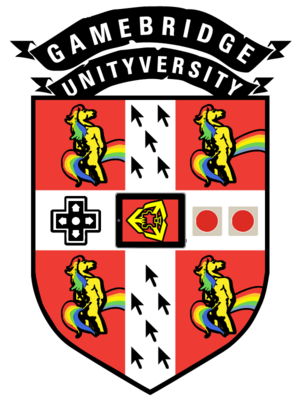 New departments of Gamebridge can be established.

A lot of us are into game development and a lot of us would like to learn how, so it makes sense to get together and share our interests and experience.

Some of us are working on an open-source game called Primer which uses gameplay to weave learning all kinds of useful things into an epic adventure through the history of the cosmos and the future of civilization.

If you want to know more about Game Development Club, just come by some time or contact Alex Peake at openprimer [atsymbol] gmail.com.

We had our first meetup November 4th and it was a lot of fun. We made a game about evil companion cubes that want to give you a hug for very explosive definitions of hug.

Unreal Development Kit is also available for free now. We'll no doubt be playing with that as well. Unreal is some seriously advanced game dev technology. It's too heavy to run on an iPhone, but it is a good way to make high-end PC and console games.

Some people are making iPhone games directly in Cocoa.

Blender Game Engine is an open-source game engine integrated with the Blender 3D studio software. It has come a long way in recent versions and some of the games people have made with it are amazing.

OGRE is not a full game engine but it does have Mac, Windows, Linux and iPhone support. It has recently been used to make a big hit called Torchlight.

SDL is a cross-platform open-source game development library that has been used to make Aleph One based on the Marathon series.