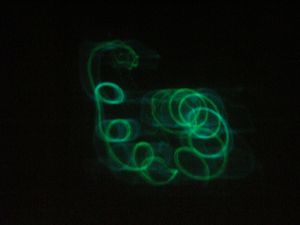 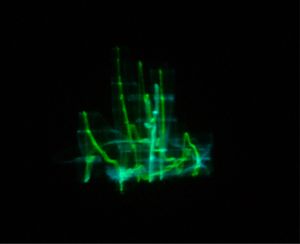 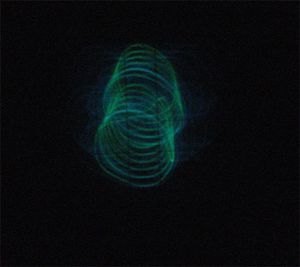 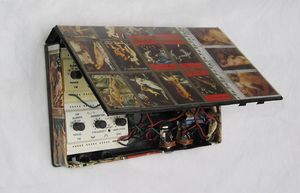 Several designs for a larger system have been worked out, after a few people see the 3D video art system, we can discuss the various methods, to asses which approach we may take. Besides increasing size and adding color, the new system design will take into consideration performance and creative applications. Two main phases to the project, the technical development and then creative content development stage, although there will be some overlap, in a good sense

Technical development will most likely be done by a smaller core group, with various technical skills, working to make a reliable, robust system. Any of the systems will require the development of hardware and software, it will be within the software development where most of the creative work lies. Once the hardware is robust and the basic software structure is in place, work can open up to a larger group of people. At first people with programming skills can develop content, and also develop content creation tools for those without programming skills.

I have been programming computers for sound and visuals since around 1982, currently work with Max/MSP/Jitter, Csound, RTCmix, Processing ect. Can offer hardware design, physical implementation and construction, programming, plus many oddball creative image generation techniques. I‘m an artist with strong engineering skills, specialized in 3D video, movies, ect without glasses, this is something I understand very well. Assistance with various technical issues will greatly accelerate the development process, and none of what I will ask for help with is rocket science(I will take care of all the crazy esoteric engineering), more specifics on this next week after we meet and discuss this in person. In the end we will produce a collaborative Hologlyphic movie and show it in public, this is where the fun really starts, there is enormous creative potential

Currently seeking funding to hold workshops at Noisebridge, which will pay for materials to construct several larger displays, and hold a collaborative art show. I'll be meeting with a fiscal sponsor Friday, May 22nd, in San Francisco at 11 AM.

I'll stop by Noisebridge at 10 AM to see if anyone interested in this project has any input as to how workshops might evolve over time. If anyone would like to have their voice heard, please show up on May 22nd between 10:00 & 10:30 AM. We can head over to the sponsor's place after then, it's at Mission and 9th.

Friday May 22nd, 10:00 AM
MEETUP at Noisebridge, Trek to meet Fiscal Sponsor-

Leaving Noisebridge at 10:30 to go over proposal with Fiscal Sponsor