Mike - with Rachel on the eyes in the back of the back, hasn't done much recently though

Jsk - programming on the go, code too text based

Rachel - eyes in the back of the back

Some people tried on the North Paw

People played with the pulse watch

Shocking Ourselves for Science 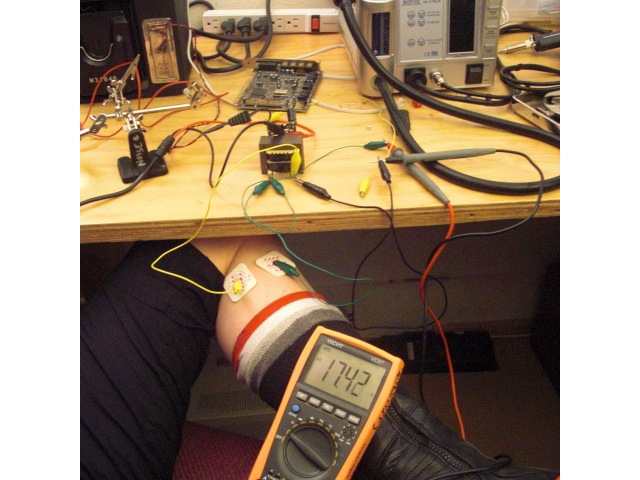 Mikolaj brought some electrodes - 3M Red Dotmonitoring electrode with foam tape and sticky gel. They are pretty cheap - you can get 100 on eBay for $19. We hooked them up to freqency generator (max 10V), but that wasn't feelable. Then we used DC power supply (up to 50V), and it's shocking at about 30V, totally feelable at 20V once you've created the circuit through your skin once. Current flow was between 1mA and 10mA. We hacked up a transformer which steps up the voltage to peak 30V (therefore about a 3x step up). It's feel-able with less voltage (down to maybe 12V for sensitive people, other people needed 20V or more), and the current flow is under a mA, therefore the power usage is <15mW, which is pretty awesome.

From page 59-60 of the "Natural Born Cyborgs" book by Andy Clark, there is an experiment involving nose tapping, which is supposed to result in the blindfolded subject feeling like their nose is 2 feet long. After trying 3 different experimental methods (instructions are not only confusing, but actually improper, specifying the wrong person doing the actions), we did succeed in feeling like we were tapping our own nose, but our noses did not feel longer.

Final procedure: two chairs, facing the same direction. Blindfolded subject sits behind a volunteer. A friend (the scientist) takes the subjects hand, and uses that control to make their finger tap the nose of the person in front of them. At the same time, the scientist taps his own finger against the subjects nose. The scientist should synchronize and randomize the taps he is generating. Repeating myself in a slightly different way, the subject should feel (a) their nose being tapped by the scientists finger and (b) their own finger being made to tap the nose of the person seated in front of them. Subjectively, the subject hopefully experiences a sensation that they are tapping their own nose. And their nose is supposed to therefore feel about 2 feet long, but in practice none of the four of us experienced that.