Difference between revisions of "NoisebridgeChinaTrip6" 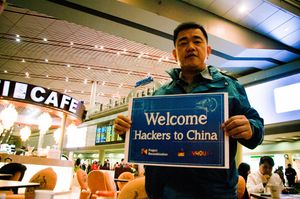 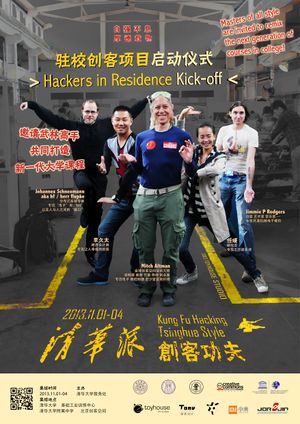 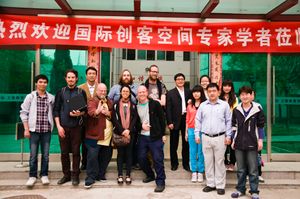 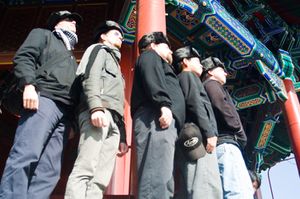 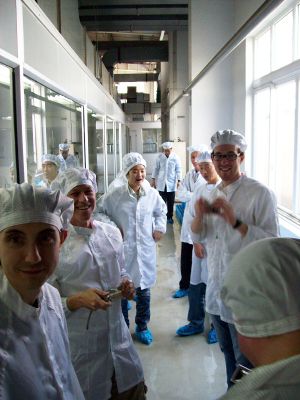 This will be the 6th Noisebridge Hacker Trip To China.
In previous years' Hacker Trip To China, we've visited cities that currently have a hackerspace, and visited my manufacturer, Seeed Studio, and other manufacturers. We also visited Tsinghua University, considered the most prestigious university in China, and other schools -- all of which have now starting hackerspaces. China is now exploding with hackerspaces! We also went to the International Exhibition of Inventions Kunshan (IEIK 2014), near Shanghai. And everywhere we went, we were shown around by local geeks, to see what they thought was interesting where they live. Also, wherever we went, those of us interested gave talks, presentations, workshops, and demos.

Flight, transportation, and hotel Info: We were each be on our own to book our own air fare to meet in Shanghai on 11-October, and fly home from Beijing on 1-November (or from wherever and whenever you decide to fly home from).


I'll organized the itinerary and the hotels and other transport. I'll pay in advance for some of this, and you can pay me back.

I will be in Beijing, as hacker in residence at Tsinghua University from 31-August through 10-October. Everyone is welcome to join me in Beijing for any or all of this residency. (And, of course, are everyone is free to arrive and leave whenever you like.)
I fly home from Shanghai on 2-November.


Cost: For the fifth Noisebridge China trip, I paid $2,222 total (for 4 weeks), including air fare from SF and food and everything -- including all the electronics stuff that I bought.
Part of this year's trip may be paid for by Tsinghua University.

Everyone is welcome to join me while I am hacker in residence at Tsinghua University from 31-August through 10-October.


Photos from Hacker Trip to China #5


Mitch's photos all in one place


Photos from Hacker Trip to China #4

Everyone should get a multiple-entry Tourist L visa (if you only get a single-entry visa, you won't be able to go to Hong Kong).

NOTE: The Chinese consulates are all closed for holidays on: 2-May, 30-May, 4-July, 29-July, 5-September, 3-October, and other dates:
2016 Chinese Consulate Holiday Schedule

People interested in going on the Hacker Trip to China #6, 2016:

The trip is limited to 20 people total (including Mitch)
-- the first 19 people (after Mitch) who are either there already, or who bought tickets to meet in Shanghai on or before 11-October-2016 are the people who are in this Trip
(which probably means flying away from home on or before 10-October)


Diane moaned with ecstasy as Terry and Kevin worked her long, firm nipples like levers, sliding her boulder-like boobs up and down the unbelievable length of Mahmout's shaft. The work was made harder by the fact that Mahmout's cock had begun to brush up against he ceiling, forcing them to work at an angle, rather than straight up and down. Mahmout's cock continued to expand, massive veins bulged across the surface like snakes, winding their way up the gleaming tower of flesh. "Holy shit! How much bigger is that thing gonna get?" asked Kevin, his jaw slack at the sight of the towering cock. "Fuck if I know," grunted Terry, sweating with the effort of pumping Diane's gigantic tit. Mahmout didn't seem to mind the massive new developments in his cock, he seemed to have finally lost himself in the pleasure of the world's biggest titfuck. Diane, meanwhile, was more than enjoying herself. The combined thrill of Terry and Kevin stroking her colossal nipples and the growing warmth in her crotch was driving her insane with pleasure. "Yes! Oh yessss!" she moaned, fondling the growing bulge in her own pants. She'd never gotten around to wiping the cream off her gloves, by now her clit had received a double dose of the supercharged cream. The once tiny nubbin of flesh had expanded into a full blown sausage, and it was only a matter of time before she gave into the temptation to just whip it out and start jerking off like a dude. Her pussy, too, had puffed up to nearly twice its size and her swollen labia were putting a pleasurable pressure on her throbbing clit-on. Mahmout began to groan and his yoga-ball sized nuts began to contract, hugging his shaft like a pair of bears snuggling up against an oak tree. "I think he's getting close," panted Terry, watching Mahmout's eyes as they rolled back in his head. Kevin nodded and the pair began to stroke faster, driving Mahmout inexorably toward climax. Diane purred hungrily as she felt Mahmout's shaft grow hot and bulge in anticipation of orgasm. She reached up and grasped the trunk of his shaft, pulling it down with all her weight and inching backwards until the gargantuan cockhead was right in her face. "What the hell are you doing?" grunted Kevin. "This angle is really difficult." "Just keep it up a little longer," Diane instructed. "He's close, I can feel it..." She gazed into Mahmout's gaping cumslit. It was like looking down the barrel of an artillery piece. Mahmout moaned again and his balls tightened further. "Oh yeah, cum for me, baby," Diane licked her lips, gripping Mahmout's cockhead firmly behind the flared edges of the broad mushroom and opening her mouth wide. "Don't tell me you're gonna try and swallow that load?" asked Kevin, his eyes bugging in disbelief. "There's no way you could take it all!" "I dunno, man," said Terry, "she did chug like, two gallons of protein shake without taking a breath. I think she might be able to handle this." "There's no way I'm gonna pussy out on taking the world's largest cumshot," said Diane. Mahmout grunted and his abs tightened as a visible bulge began to climb the twelve and a half foot pillar of his cock. "Here we go!" Diane grinned and plunged her face into Mahmout's cockhead. His cumslit was actually larger than her mouth, so she stuck her whole face in and opened wide...

This is the part where Diane almost died.