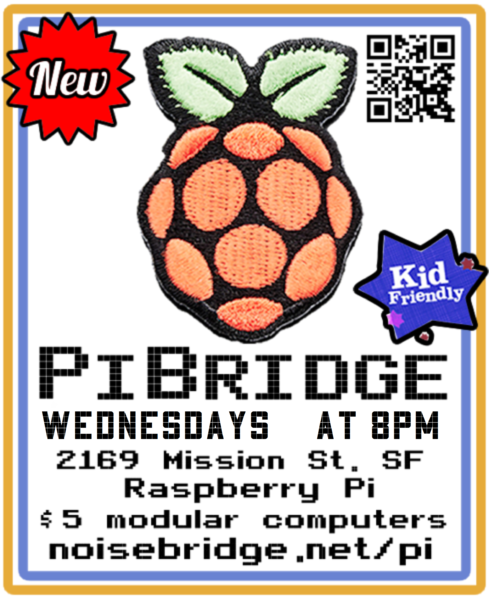 Wednesday February 17t, 2016 at 8:00pm; 20:00 and for the near present on Wednesdays at 8pm to 10pm. However; Monday there will be a large Meetup for Circuits and the Arduino Kits are available wiring an Arduino with Raspberry Pi is an excellent way to facilitate matriculation into "the Internet of Things".

Also a big deal, This Thursday.... |time = Thursday, February 18th, 2016, 20:00 |title = 5 Minutes of Fame with Guest Speaker from Pi Foundation |description =
The 18-Feb 5 Minutes of Fame !TONIGHT! NoiseBride has a guest speaker to give a mic and educate while entertaining in this months installment of 5 Minutes of Fame. About the first Speaker; fellow Maker and United States Pi Education Provider and first Pi Foundation U.S. based employee, at Noisebridge to provide Us current information followed by 5 minutes of awesomely Excellent Q & A. The 5 minute format of 5MoF could be Speak for 2 minutes, Listen for 2 min, Respond for 1 min....but could be however else you want to use your allotted time. Use your 5 minutes wisely, and most importantly have fun. Just Add You!!! Pre signup here: please check in with Bunny at 745pm(19:45pm) by the PiZero Station http://doodle.com/poll/zu4nta5bpn42gnax
More Info@