Currently Eric Boyd and Chung-Hay are working on this device.

Generally all commercial ones a just little electrocardiogram units.

"An electrocardiogram is obtained by measuring electrical potential between various points of the body using a biomedical instrumentation amplifier. A lead records the electrical signals of the heart from a particular combination of recording electrodes which are placed at specific points on the patient's body."

However, for this project I think the best solution may be optical. There is apparently a small change in the optical properties of your skin with your blood pressure, meaning that pulse can be observed by an optical sensor pressed against your skin. I have a working "pulse watch" which uses this principle.

Armature: Choker, plus it is likely that it will have to have a pendant hanging from it, which would contain the circuit and battery. The vibrator might also be in the pendant. The hard part of the armature will be how to wire the LEDs in a "soft" way (no ribbon cables around our necks!). Also, the optical sensor will have to be held against the neck even while the neck moves, you breathe, etc - that might be tricky. We have experimented with conductive thread with crimp beads, but they are very difficult to use, and end up being more fragile than is really acceptable. We are presently investigating silk-screening conductive paint, and flexible PCBs are possible armature ideas.

Electronics: For prototype, arduino and probably a small op-amp circuit modeled on the circuit inside the watch. To make it wearable, we'll probably have to use an attiny or other similarly super small device.

I already have a set of chokers with surface mount LEDs inside (I've shown this at prior meetings during show and tell). I am unsure of how the LEDs are wired - it's possible that they are all controlled from the same wire, in which case the device will not be able to display as above, and instead will simply flash. I got the chokers from Rebeccas for only $2.15 each, so if they are suitable they make great kit components.

I've done some google searches, but I haven't been able to find anything like this. There are some pulse-sensing watches, for instance Chinavasion: Exercise Watch - pulse + calorie reader or see some reviews at Heart Rate Monitors. These devices almost universally have a small display, but I think a haptic solution could be greatly superior. 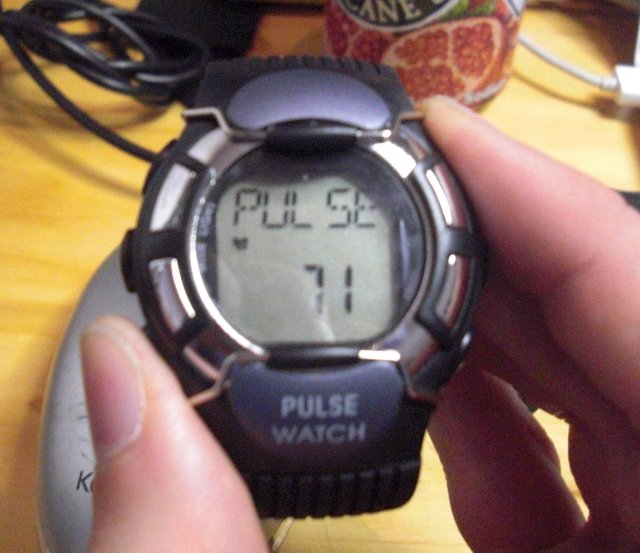 Lessons Learned Along the Way[edit]