Difference between revisions of "Threed"

This page is for the 3D print workstation, "Threed". For information about the printers themselves, see: 3D Printing

We have two printers! The FlashForge Creator, and a RepRap Prusa. I've never seen anyone using the Prusa, but the Creator is popular. If anyone knows how to use the Prusa, please update this page!

See this forum page for troubleshooting everything about the printer: http://3dprintboard.com/showthread.php?491-Flashforge-3D-Creator-forum

The Flashforge Creator doesn't seem to work as well on a cold day.

If you've just sat down in front of Threed and the Flashforge Creator, you'll probably see a dark cold printer, and a blank or locked screen. Turn the printer on using the switch on the rear left (next to the power cable) and make sure the USB cable is plugged in to both Threed and the printer.

Drag the lock screen up to get to the desktop, move the mouse to the top left hand corner of the desktop to open the menu, and click 'Show Applications' (3x3 grid at the bottom of the menu), then open Terminal. Type the following:

Now prepare the build platform (see below) and try out one of the example prints. Select File | Examples | 20mm_Calibration_Box.stl from the top menu, then click Generate GCode. Select the left extruder, no raft, no support material, default gcode, use print-o-matic, 10 infill, 0.27 layer height, 3 shells, 80 feedrate, 100 travel feedrate, 190 print temperature (220 if the air temperature is below about 60F). Click 'Generate GCode'.

Once the GCode generation process is finished, click the 'gcode' tab (above the 3d / gcode display part of the window) and look for this line:

(This sets the temperature of the heated build platform to 90C, which is correct for PLA. 110C is good if you're printing with ABS plastic.)

Now click the icon at the top left of the window that looks like an arrow pointing at a bean. The printer should home its platform, then spend some time warming up, and finally do your print!

If you're printing in PLA, you want the part of the build platform that'll hold your part to be nicely covered in blue painter's tape. It should be sitting flat on the platform, not all bubbled up (which happens when someone sets the platform temperature too high for the tape). If it looks messy, rip it off and replace it.

I haven't had as much luck with ABS as PLA; it's a more difficult material to use, and you need to tweak the temperatures to get it to work properly. The instructions on top of the Flashforge Creator say to extrude at 230C, and use 80 for both feedrate and travel feedrate. Make sure you select the right hand extruder when generating GCode. I believe 110C is correct for the platform temperature, so you shouldn't need to edit the generated GCode like when printing with PLA.

You should also use kapton tape (translucent orangey stuff) on the build platform as opposed to the usual blue painter's tape. 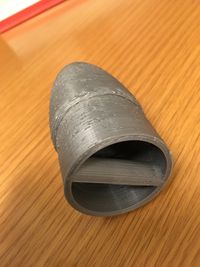 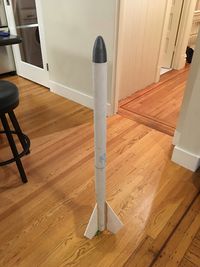