This is the PC-side software for the BioBoard, an arduino shield that connects to a set of sensors that allows monitoring of several different, biologically relevant parameters in luquid microbial cultures, such as bacterial or yeast fermentation. The parameters we settled on were temperature, biomass / cell density, acidity (pH), and oxygen levels.

The PC software has two parts:

The logging daemon receives data from the Arduino and logs it to a database. The Arduino can be connected either directly over USB or, if you have an Ethnernet Shield, over a local network or the Internet.

The web application lets you create new projects and view graphs of the logged data.

After verifying that everything works, you should create a new project in the web app. Make sure the web app is running (as per the install guide), point your web-browser to http://localhost:3000/ and click the "Start a new project!"-button. Name the project by filling out the "<give your project a name>" textbox. 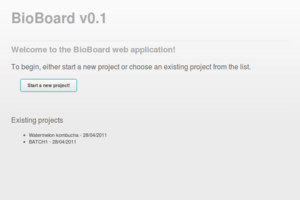 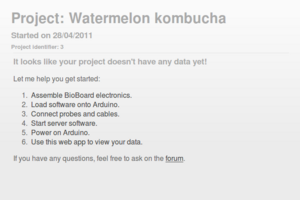 Page for a new BioBoard project.

There are two ways of connecting the BioBoard to the log server. One is to connect the Arduino to the computer running the logserver using USB. The other is to use an Arduino Ethernet Shield to connect over a local network or the Internet. First of all, make sure the log server is running, as described in the installation guide.

and let it run for as long as the log server runs. If your Arduino is not connected at /dev/ttyUSB0, then you need to change this in the serial_forwarder.rb program and in the above command.

Now connect the BioBoard to the USB port of the computer running the log server and hit the reset button on the Arduino. The Arduino will immediately start sending data from the connected probes and sending it the log server which will log the data in thedatabase.

The code for using the Ethernet Shield has not been integrated with the rest of the Arduino code yet, but if you've used an Ethernet Shield before it should be fairly straight-forward. Instead of sending data over the serial connection, you need to modify the program to connect using TCP on port 9090 to the computer where the log server is running and send the data over that connection.

Now you are ready to view the graphs generated from the probe data. If you still have the page for your new project loaded in the browser, simply hit the browser refresh button, otherwise go to http://localhost:3000/ and click the project name under "Existing projects".

You should now see your graphs, one for each probe. You can toggle the graphs on and off. Features such as adjusting the x and y-axis scales are coming soon!

Example of a project page displaying graphs for logged Temperature and NIR data.

Don't worry about shutting down the serial forwarder, log server or web app. All your data will be there next time you start it up. Your entire database is stored in the file BioBoardSite/db/dev.sqlite so if you want to back it up, simply shut down the log server and make a copy of that file.