This is the overall workflow for the laser cutter. Each part is elaborated below. 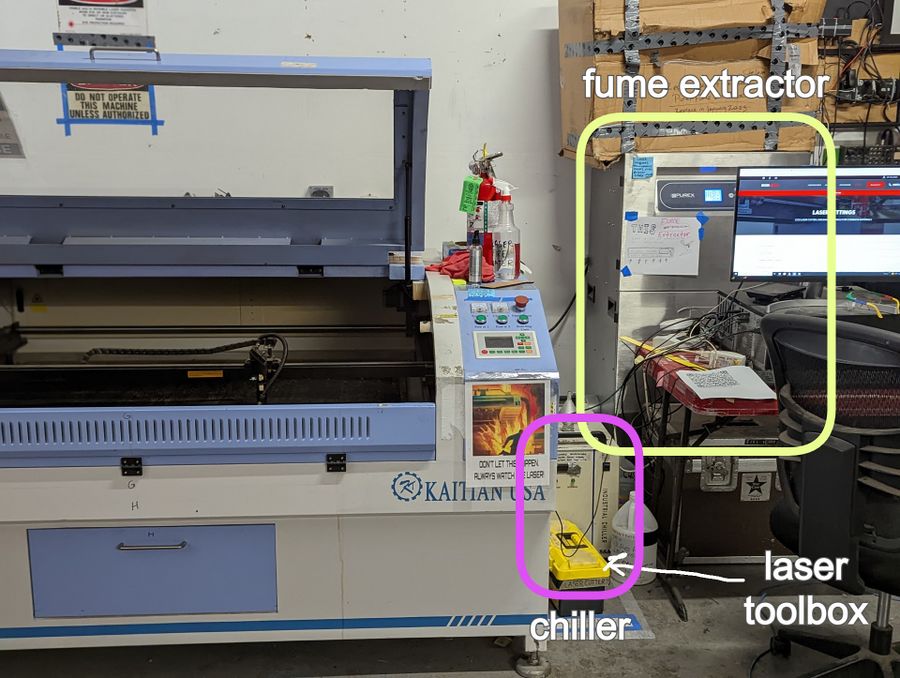 the chiller is the white box circled in magenta and the fume extractor is the chrome box circled in yellow. The laser toolbox is the box with the yellow lid in front of the chiller, and contains the laser focus discs.

Laser chiller, bad (alarm) state on the left, good (normal) state on the right. Note that the normal LED is quite dim. The chiller will also beep loudly if it is alarming so you can tell easily if it's in a bad state. 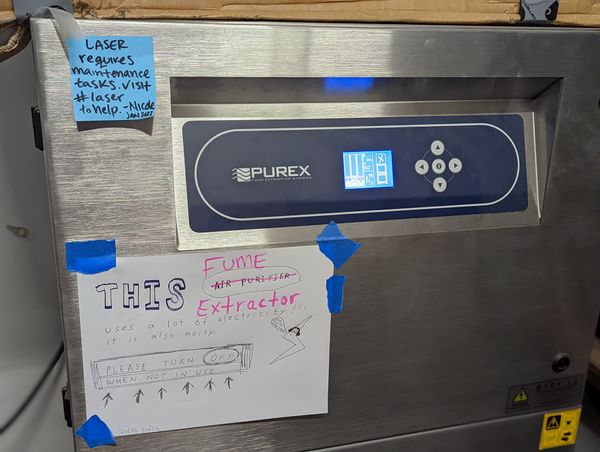 Fume extractor for laser cutter, on and running properly. 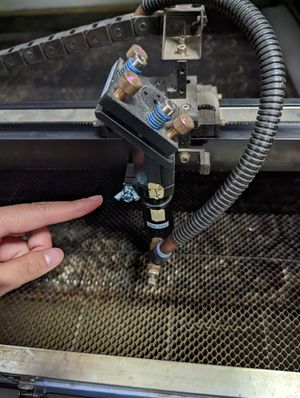 Noisebridge has acryllic disks cut to various thicknesses that can be used to accurately focus the laser. Specifically the laser head needs to be locked to 8mm above the surface of the material you're cutting.

Convert an image in Inkscape to a DXF file[edit]

Sometimes exporting to DXF introduces bizarre extra lines. Usually this is because your artwork includes elements that aren't paths (a.k.a. Bézier splines), such as text objects or clones of other elements. Here are some things to try in Inkscape (especially the last one):

If this fails to resolve the issue, you can try a more radical solution which will eliminate all bezier paths entirely:

Flatness 0.5 is good to start with. Smaller = better approximation of the curves. A lower flatness number takes more time to compute, but also produces a better approximation to the curve. Be sure to ungroup (sometimes multiple times) before trying this, as grouped objects cannot be flattened as a group. This is especially important for text which is by default a group (each character being a separate object in Inkscape once you've turned it into a path).

Sometimes need to select the path's directly with the path tool (but not the points!).

Also see http://www.pstoedit.net/ for conversion from svg to dxf files.

In the Set cutting property window (Edit > Set cutting property), you can manually re-order the cut paths. In the window, you'll see an image of the workpiece, and to its right, two lists of paths. When you first open the window, all of the cut paths are in the left. If you select a path (either in the image or in the list) and click the button labeled ">>", this path will be transferred to the end of the right list of paths. If you click ">>>", all of the paths in the left list will be moved to the end of the right list (preserving order). Similarly, clicking "<<<" will move the right list to the end of the left list. If you select a cut path in the right list, the up and down arrow buttons will reorder that path in the chosen direction.

In the laser software, open the layers you wish to engrave in the layer parameters panel, and send the processing mode to "Scan". This will do a raster scan of the region bounded by the paths in that layer. An even-odd rule is used to assign regions to the "inside" vs "outside" of the engraving. 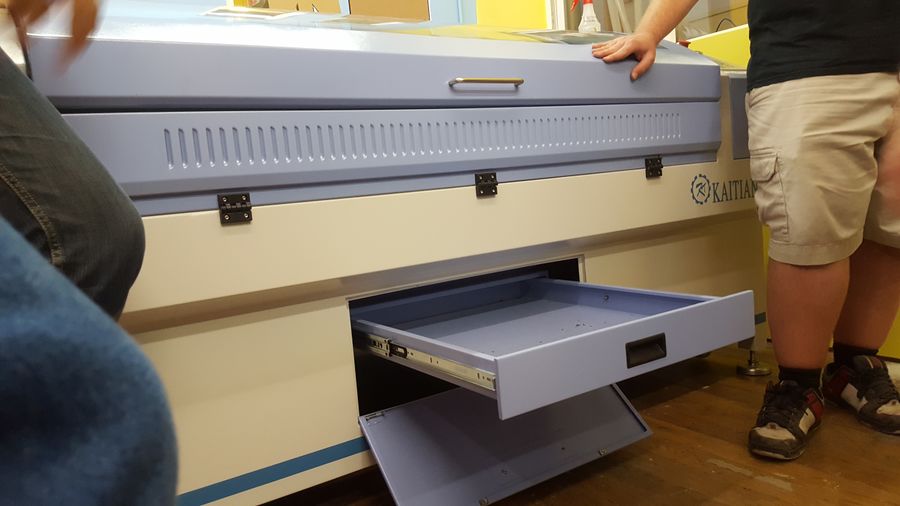 This is the bottom tray of the laser, which should be cleaned out after use.

Fusion 360 is a free CAD (Computer Aided Design) program from Autodesk for designing 3D parts, and arguably the best one currently available. If you're designing something complex on the laser cutter, particularly with multiple parts that need to fit together, I highly recommend it over drawing programs like Inkscape. It also has CAM (Computer Aided Manufacturing) capabilities, which makes it very useful for CNC machining and laser cutting. There's a copy of the software on the laser cutter computer, and you can download it here. It's free as long as you make less than $100k per year using it.

Workflow 1: The Quick and Dirty Way[edit]

This is the fastest way, and works a lot of the time

If you're not sure, this is probably where you should start.

This allows more complicated things like exporting splines, which doesn't work with the above methods, kerf compensation, which makes your parts fit together snugly, but you can also use the above methods and then do it in RDWorks, or lead-ins and lead-outs, which can make for a cleaner cut, but I can't figure out how to get RDWorks to import correctly.

For any given layer, you can compensate for the kerf (width of the cut) by opening it's settings and clicking the "Advance" button next to the "Seal" input box towards the middle-bottom. Enable sew compensation, and pick the direction and sew width (kerf size). The inward direction will make the actual cut move toward the inside of a closed cut path, outward will move it towards the outside.

You can engrave a vector shape with a hole in the middle of it, so that you get enclosed portions that are not engraved in the middle of fully engraved portions. To do this, when you construct the image in your editor of choice, simply perform subtraction between the relevant paths, to remove the inner part. In the RDWorks laser software, the two paths will show up, and be independently editable (making them look like just two distinct paths to engrave), but they will engrave correctly as a negative space. Obviously test this w/ your software; this technique is known to work using Inkscape.

As of 01/2018 you can use the industrial strength Deepnest installed on the Laser Cutter computer + Collaboration Station in Hackitorium. We have an unlimited subscription available to laser users, which is compatible with both DXF, Corel CDR and SVG formats. Please ask if you need login credentials. Also available from the same author for free is SVGNest, which can be used by clicking here.

In Inkscape, after converting the text object to a path, it's necessary to ungroup the text as well, to create separate paths, prior to flattening the bezier curves.

If you're using a cursive font and want everything to be one piece, convert the text object to a path, and use Path > Union. This tool in general is quite useful for merging paths that have been independently drawn but need to be merged into a single path. For example, if you made two overlapping circles, without this the cutter would just cut the two circles, which leads to a lemon-shaped piece in the center. If you union the paths, it will cut an outline as well. Path > Union will not make any holes in the figure go away, it only gets rid of cuts passing through area covered by another shape.

Engraved text requires no other special technique because no cuts are made, but text cutting is non-trivial. Because of loops, it's sometimes desirable to use a stencil font, especially at smaller scales where legibility is important. 1001 Fonts has a number of stencil fonts for free. At 10pt, some good fonts are Marsh, Spacedock, and Allerta.

If the laser cutter has 99 files loaded into it, new files will not show up. To fix this, open up RDWorks8, and on the right side, select the Doc tab. Inside that tab, click Read to read all the files in the laser cutter, and then click Delete all. 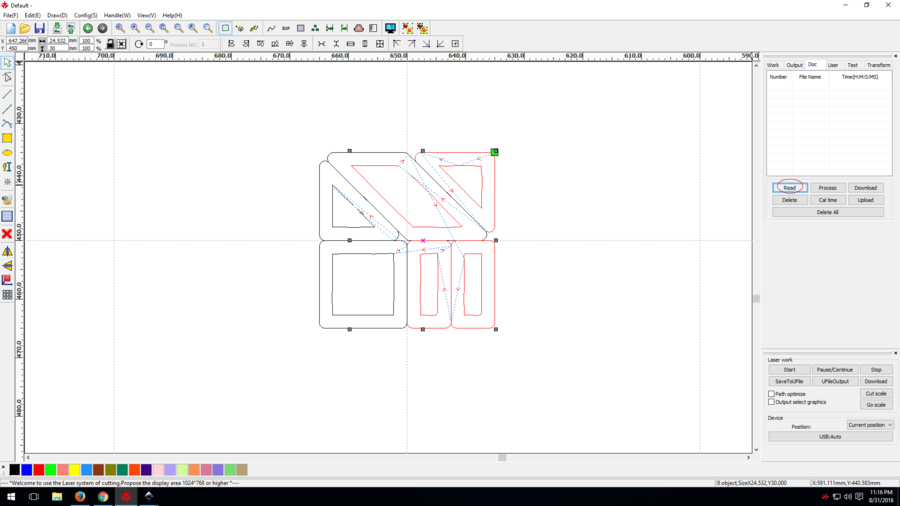 This is the button used to read stored files from the laser cutter.

This is the button used to delete all stored files from the laser cutter to make room for new ones.

This is likely because the e-stop was pressed before, and it needs to be twisted to be released back into its popped-out position.

How do I send files to the Laser computer over the internet?[edit]

Send your files directly to the laser cutter through this URL [1], which is kindly hosted for us by Disroot.org via Nextcloud.

Please move any files you upload to your own folder asap.

Ok, I created a folder for my laser cutter files, but can I access them over the internet?[edit]

Help! All the menu options turned to gibberish![edit]

The RDWorks software can be buggy. Go to the top menu, the right-most or or 2nd-right-most tab will have a Language option. Select English. When that happens, the bed size settings might also have changed. Double check Config -> Document Settings (?). The proper settings are 1300mm × 900mm. (TODO: need to double check the exact menu labels, doing this from memory at the moment)

Apparently DXFs exported from Solidworks (at least v 2017) break when directly imported into RDWorks. The workaround is to import the DXF into Inkscape and re-export it from there.