Once again, and probably from here on out, this recap covers more that just the single build night as we make our push to being ready for the show! This weeek we started working on the table top finish surface and finished wiring up the electrical. 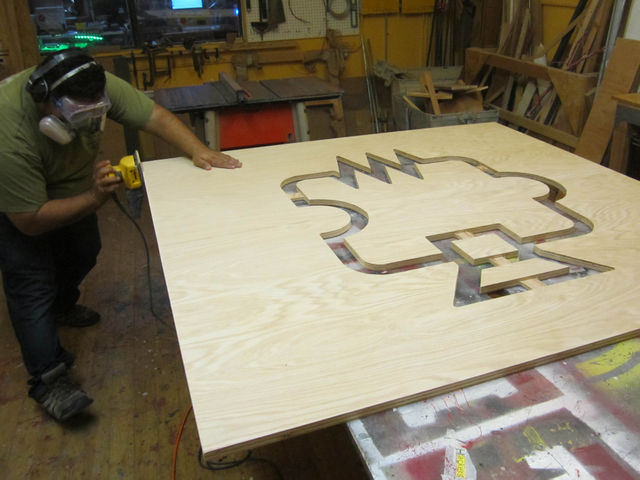 We are finally working on the table top again since routing out the logo way back when. To start the finishing, we sand. J sanded over the top once and then we wiped it with a damp rag to get it a little wet and raise the wood grain. Then we sanded it again and ended up with a fairly smooth finish. 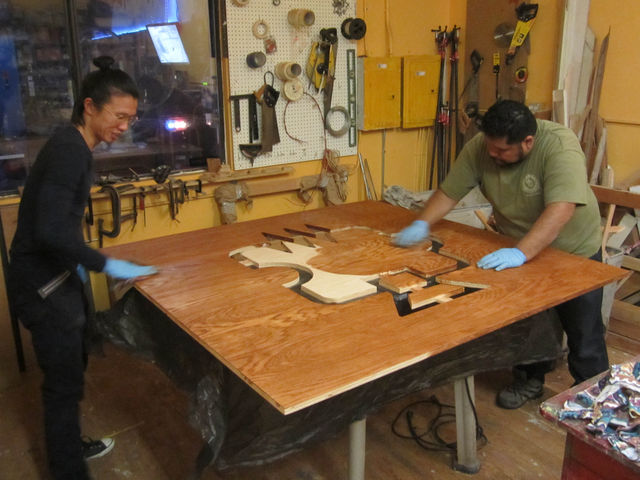 At Howard's suggestion we decided to stain the top. The idea is that the darker tint would help make the resin logo stand out more, even when it is off. Here Howard and J rub some Varathane brand "Light Walnut" stain into the table top. 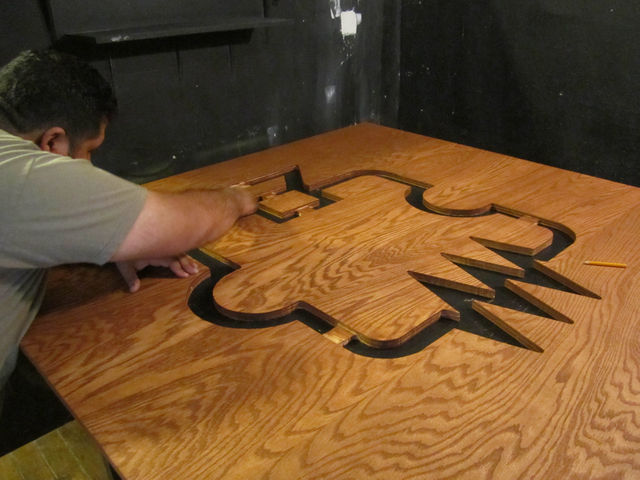 The former darkroom is a pretty good spot for working on large projects that need to stay in place right now. (hopefully the Digital Archivists don't mind me moving their new scanner around). Before we cut the tabs holding the island parts of the logo in the tabletop, we traced their positions in pencil on the surface that we would eventually be pouring the resin on so that we could realign the parts after they were cut. 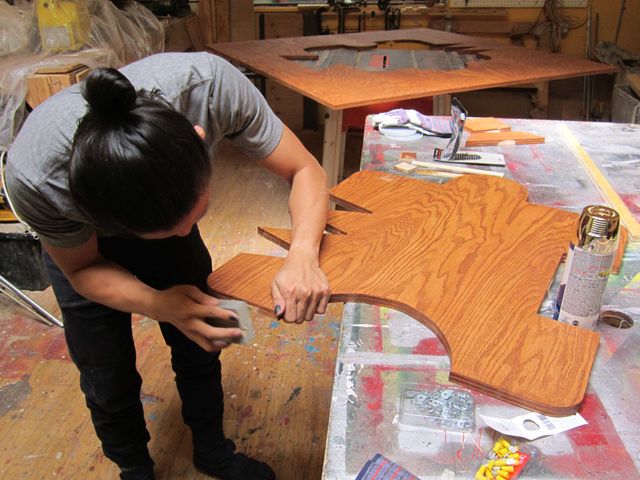 And here is Howard cutting and sanding the tabs off of the island parts. For the pour, all the parts were adhered, with spray adhesive, to a sheet of mylar covering the work surface. To hold everything in place for the pour, the table top was screwed onto the work surface from the under side.

Then we started the pour. The resin we used was a one to one mixture that we added a pearlesent pigment to and stirred vigorously for two minutes. Once fully mixed, we poured it into the logo. 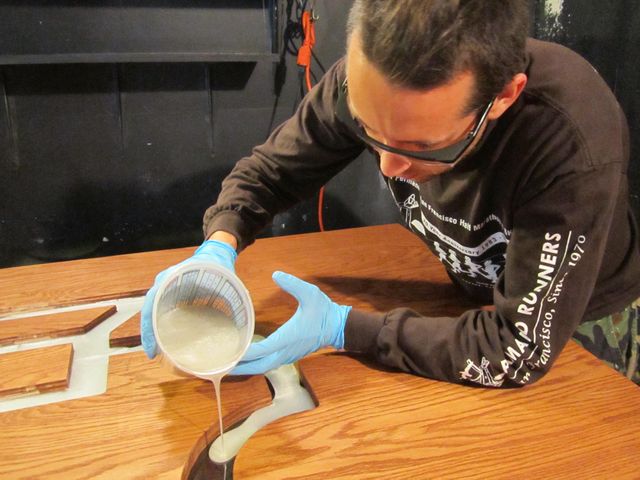 We tried to be extra careful to not pour on top of the table during this phase of the table top finishing. We also made sure that our surface was as level as we could get it before pouring.

Here is the logo getting filled up. We worked with 32oz batches of resin and slowly worked to fill in the logo. I calculated the volume of the logo to be ~166oz 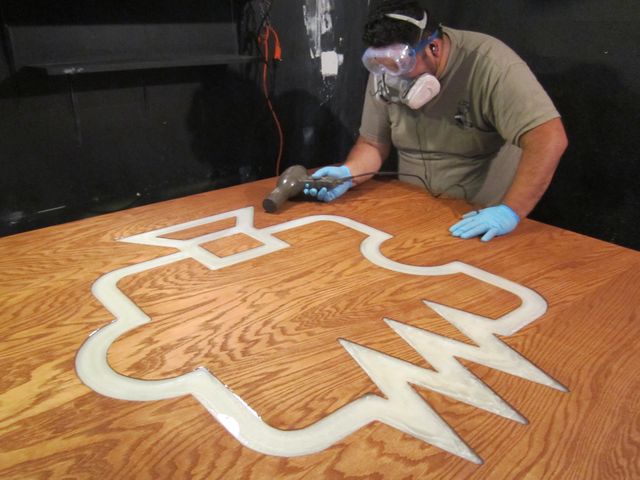 After about 4 minutes after the pour we used a hair dryer to go over the resin to pop the bubbles that had risen up to the surface. As the resin got thicker, this got harder to do since it was heating up and thickening up more quickly. Next time we should probably space out the pours. 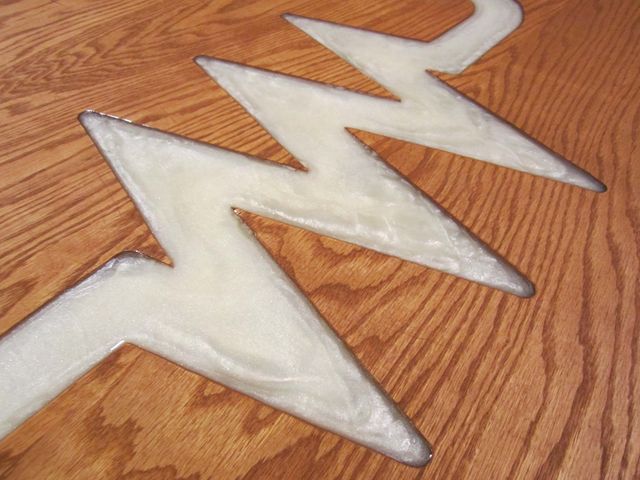 Here is the state that we left off at. We were close to the surface without going over. This entire top will be finished with clear resin which will fill in any depressions that developed in the previous pour. 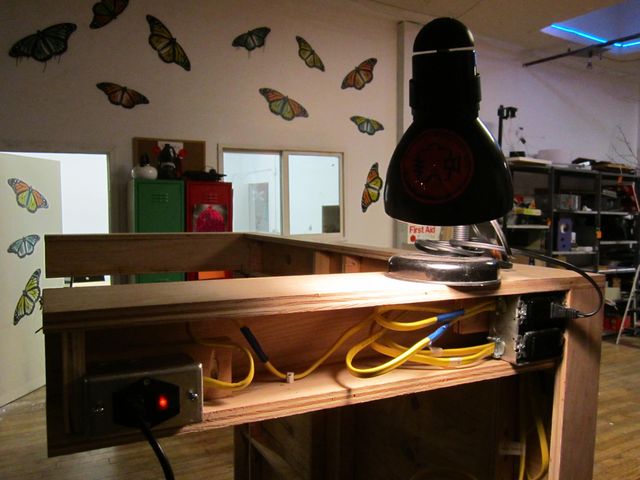 The power is coming from INSIDE the table!

After the pour the electrical wiring and outlets were installed and powered up. They seem to be working fine so far.

During Circuit Hacking Monday we started attaching LEDs to the recessed logo channel that will shine up through the resin top. This will be a whole lot of soldering.