The 144th Meeting of Noisebridge

Polling for the board election was announced.

There is a new binder! The old binder now has actual members in it, the new binder has people who are going through the membership process.

Lots of people going through the membership process, including people who used to be members, resigned, and now want to be members again.

User:Jack was up for membership. He shoots! He scores! User:Jack is now a member of Noisebridge. He pulled the following face: 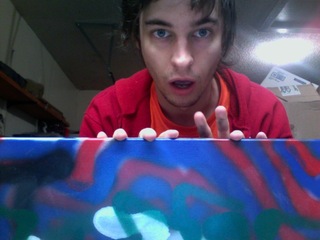 Answer: Generally, yes, although people have slowly been starting up after the vacation. If you turn up to something and there's no-one there, please post to nb-discuss and make a note on the wiki, so we know to nudge someone and eventually remove it from the list.

Question: Can we move that pile of crap by the elevator?

Answer: The pile of crap by the elevator is stuff to be taken to the dump. There is a communal sense that somebody is coming to get it, and take it to the dump in mid-February. If others wish to take part or all of it to the dump or anywhere else before then, that is fine.

A Noisebridge member meeting was held. Polling was conducted to decide on who the new board should be. Jason Ducek and Steve Dee were the nominated election officers.

The ballots recorded were:

(Note, the official results were sent to noisebridge-discuss, see for example here)

Miloh, Rachel, JonL, Danny and Al were elected to the board of Noisebridge.