The 167th Meeting of Noisebridge

Funds in bank: Kelly's report is not here - But the bank funds looks to be still about 3 months ahead. We just got $3,000 from BayCon auction. Thanks BayCon!

Names read: Jorgen from the Free School, Espin, George, Patrick L, Malachi R., Kevin S. No one is up for membership this week. 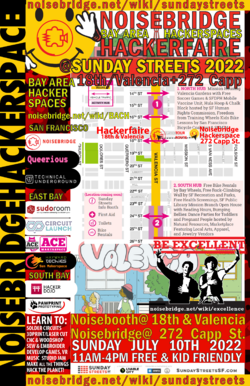 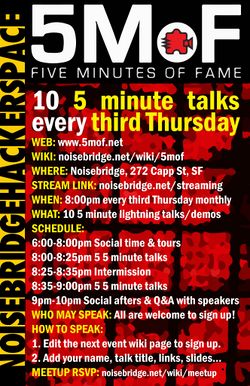 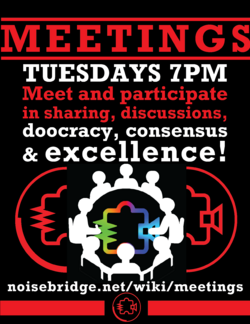 Miloh, we got a lot of LED signs from Hacker Dojo, and they are now operational We need 5 volt /3 amp supplies for them.

Danny would like to propose for consensus paying someone to clean on a monthly basis.

Danny would like to meta-discuss the structure of the meeting.

Finally, Danny would like to mention a chat he had with the Free School folks.

Someone would like to anonymously point out that Free School and friends have turned the space under the laser room into their personal belonging storage for the past month or so (go check it now, it's a Noiserat nest heaven up in there!). Personal as in clothing, personal hygiene products, items one would normally store in a place they're living out of. Considering that it's illegal for anyone to live at 2169 Mission due to our lease and the city zoning code, does Noisebridge as a collective want people keeping their personal belongings (in this instance things you'd normal keep with you traveling or at your home) in the space? Additionally since such items are being left at the space, concern to their security and well being should be voiced considering Noisebridge as a collected sees property like this as automatic donated to the nonprofit, which was outlined in previous meetings. Or you could just delete this discussion item since I currently lack the energy (backbone?) to debating such things on my own but would like to see some action taken by the group.

Al would like to talk about filth. Noisebridge is very dirty so let's think of ways to get it less filthy

Liz: It wouldn't help with daily level of filth but might be a good deep cleaning.

Miloh: What about setting a cap of how much $ we would spend on cleaning per month and for how long. What would we want done - we would have to describe what needs doing.

Didn't we have a spending freeze? No one remembers.

"If we don't remember, and we don't bother to look it up, then we can just ignore it"

Question from Mike about washing machine and dryer. Al says there is a bag of towels once a week or so and he takes it to a laundromat and washes it.

Will: Started a cleaning fund pledge page, didn't get many pledges.

Liz: spec out the jobs really well on signs, have spot to sign up and say you did it with the date. Describe job, what it means to do it, time estimate, supplies needed.

Will: hire someone privately and see what difference it makes.

Al: if it would be easier to hire a member then let's try that.

Aestetix: Have a list of things to do, dates like with the bathroom cleaning. It's a gentle reminder.

Miloh: Annoyed because we already have these lists (somewhere) And wants to just hire someone. We keep talking about it.

Aestetix objects to the idea of paid positions within Noisebridge.

Sebastian says he had a cron job, every member had to do 1 hour of cleaning per year, the cron job would send out that it needs to be done. What if all members agree to do X hours per time unit.)

We have many more people that use the space than that are official members. Maybe 10% are members.

Liz commits to write job descriptions and print them tomorrow and put them up. Aestetix and Will are going to help. Liz is going to just buy a laminating machine.

Will wants someone to just come mop the floor.

Danny proposes we do a one-off deep clean of the entire space. What would the person do? How much? we need a quote.

Will brings up donating. What about if on Monday nights, have someone walk around with a donation jar at crowded times and try to raise money.

Miloh thinks it is offputting to have the donation jar right in the center of an activity.

Danny says he will go around begging for donations during Monday nights.

People keeping their stuff in the laser room, clothes and bathroom stuff as if someone's person's belongings. Under stairwell, under laser cutter, etc. Other people are asking them not do keep their personal stuff here in that way. Al left some signs on their things asking people to move the stuff, with his email address for them to contact

It's illegal for people to live here.

John says he checked the zoning law and there is nothing about sleeping in a space it is about residence.

Aestetix says it's more about the social nuisance.

Cynthia: the electronic door is often not locked. So maybe it is good that people are here in the night to guard the space.

General groans around the room that we don't want to hash out this whole "sleeping at noisebridge" issue again right now, omg.

Is any of this a sense that the free school is a sort of "hippie problem" (anonymous note ) Are any of them members? Are they donating? Are they cleaning up after themselves? Do they talk to people?

Danny adds that no one had asked them to donate or be members until he asked them the other day, and one person immediately signed up in the membership binder.

Miloh says there is a general problem keeping personal stuff under the DJ room.

Aestetix: can we describe what the issues are individually and address them rather than identifying a group and blaming them?

Sebastian talks about projects in Germany and how they asked the "freeloading" projects to donate and give back to the space that provides the infrastructure.

Danny: Raised this issue because he wonders if we have some way for an institution to "become a member" . What do we think is a reasonable way to ask them to integrate or participate or donate in a greater way?

Miloh: There would be some people we would be tempted to block.

Aestetix: can an organization block consensus.

Liz: But how can the rest of us learn about this or help, if this is a general known problem?

Will: people are showing up and there are actual individuals and behaviors we want to change. Not about another organization.

Danny: what are the bad behaviors?

Will: When people stash stuff here, use the kitchen as personal dinner making and make a mess and they leave their dishes and the food out.

Danny: But that is that the kitchen is getting used a lot more. And that is good. We just need to adjust. Maybe that's not the problem.

Danny: what can we do to talk with them, and what would we ask them to do?

Aestetix: we should feel free to go up to people and say This violated my personal boundary and i would prefer that you do it differently.

Al did a really good thing rather than make it "noisebridge rule" talk about how the behavior is offensive.

Danny: We do have a scaling problem with communication in general so let's not scapegoat a group or assume that everyone who does something objectionable is part of that group.

Miloh: Had conversation with Jonah and others about some activities not being really good for Noisebridge, like martial arts, yoga, and they didn't do that. But they do have Qi Gong classes.

Miloh: If an organized group comes in and wants to do stuff here, let's sit down and have a meeting with them right away! To establish what might work and what might not.

Danny: Some people really like them and what they do.

Let's be clear about this on the discuss list and also email the Free school people.

Baycon guy shows up with a check! YAY BAYCON!