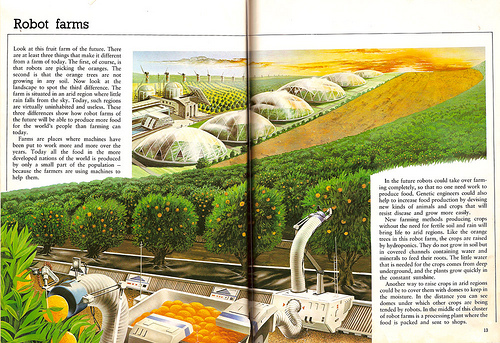 This page is for collaboratively buying a large parcel of land in the northern half of California, to be collaboratively and collectively owned and cultivated for sustainable living and farming and generating energy by members of Noisebridge and their ilk.

Because Noisebridge-style openness draws many people from different directions and styles, a collectively owned property would have to be large so that people don't chafe on one another. Nobody is suggesting getting a house in the city and letting anyone come crash there, although maybe someone could.

Because of the state of the US Economy, now is a good time to buy land [citation needed]

Noisebridge operates on NoiseRule, which is "Be Excellent to Each Other" which is an excellent rule because it is infinitely flexible and adjustable by consensus. Other guidelines will have to be formed in the process of people expressing interest in this idea. There will be other rules at NoiseLand out of necessity, but rather than behavioral rules these will likely be things like Dont Light Big Fires Next To Buildings. Practical things. Black Bear Ranch (a similar land project) and Hellarity House (a collective house in Oakland) are referenced below as resources on where to learn how this stuff actually hashes out.

From a financial and practical sense, buying land will be somewhat similar to Noisebridge renting a building in La Mission. A large amount of cash will have to be paid as a down payment, and then a chunk of cash every month will need to be paid, for 15 or 30 years (or somehow just paying it off, or the previous owner donating the land). Obviously it can't be NoiseLand if it is owned by an individual or small group of individuals, because that would color everything.

After the loan is secured and cash starts flowing, those who supplied portions of the down payment can begin garnishing the income to pay the back according to agreements made before the process started.

There should be a way for people to buy in to this later, after the initial phase, but that might be tricky to set up.

Proposed uses and purposes of NoiseLand[edit]

Land worth buying will have sufficient LEVEL property, sufficient WATER supply (from a well; it is not permitted to draw from a stream) and reasonable ACCESS by road. Hunting is a good way to secure food, and many areas have lots of deer in the winter. Hunting Concessions are covenants signed by property owners permitting people to hunt on their property in exchange for the right to do the same. Farming requires sunlight, good soil (the right mixture of sand, clay, and organic matter) and WATER. Mushrooms grow in wooded areas and nearby forest preserves.

Much land in northern California is at high altitudes. While there is more sunlight at much higher altitudes, it's also much colder and nobody likes that.

It should probably be able to get Internet from the grid, although satellite internet is available but heavily metered and *highly* latent. Depending upon location a rural WISP could be another option. (IMO this is unlikely to already exist on land we are looking at and we might need to pay lots of money to run data cables to our land from Town).

We should consider the neighbors. Are they going to freak out and object to a bunch of technohippies building yurts? Or, the other way around, are they gun nuts growing giant amounts of pot in underground hydroponics setups?

Price per acre. Collect a few sample prices from different locations to get an idea.

Add possible locations you recommend, whether areas or parcels for sale.

Jamesburg Earth Station: Under $3 million! Has a large battery room, heavy power and data connectivity back to the main grid, nuke-proof, zombie resistant, has ~ 100' satellite dish! [1] [2] [3]

Bid4Assets.com is how California (and other states) auctions off parcels whose taxes are delinquent, county by county.

other counties to look at:

Tuolumne, California has been suggested, and it appears as green on the map as Mendocino but slightly closer to San Francisco. It also has the benefit of being impossible to decipher when spoken, so it's a form of spelling encryption. michael o says "there are other spots near and around, including down out by James town going toward wards ferry. look at a map and check it out, it's beautiful out there and the land is cheap."

It would be really cool to convince all the other hackerspaces that we have an outpost on Jupiter. Google map of Jupiter, Tuolumne, California

Owning land means we can get a Bus, used to shuttle people back and forth from the city. It can also have bunks in it so people can sleep during the ride, or when the bus is parked at the land it serves as a few bunks and a room.

In the same way that Realtors escort you through the house-buying process in the city, Realtors will meet you at giant land parcels for sale, walk around the place with you (and they carry GPS) and help you understand things you may not have thought about in those situations. There are many large parcels on the market right now for which a Realtor could arrange a tour.

Bolo'bolo is a book written in the '80s about how people would live together "within ten years" all over the Earth. It is anti-copyrighted yet somehow I CANNOT FIND A COPY OF IT TO DOWNLOAD how can this happen?