For that professional feel, order a printed set from DriveThruCards.com. A portion of the cost listed on DriveThruCards goes to them and the rest goes to us. Big orders can get a discount. 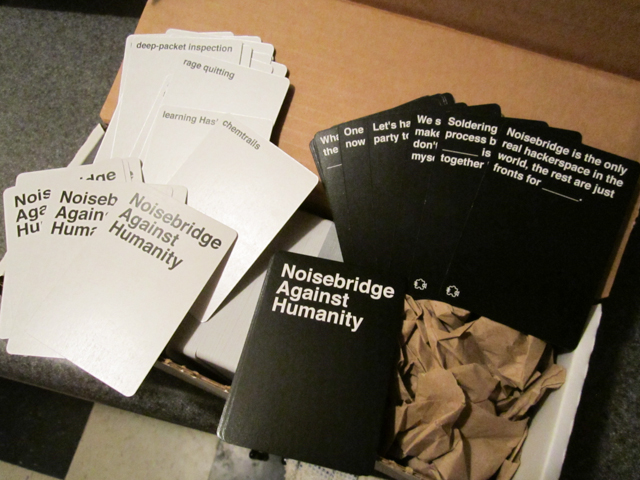 To start the game, each player draws ten White Cards.

After the round, a new player becomes the Card Czar and everyone draws back up to ten White Cards.

Some cards say "Pick 2" on the bottom. To answer these, each player plays two White Cards in combination. Play them in the order that the Card Czar should read them - the order matters.

If the Card Czar has lobster claws for hands, you can use paperclips to secure the cards in the right order.

If a Black Card is played and you have more than one White Card that you think could win, you can bet one of your Awesome Points to play one additional White Card.

If you win, you keep your point. If you lose, whoever wins the round gets the point you wagered. House Rules

Noisebridge Against Humanity is meant to be remixed. Here are some of our favorite ways to pimp out the rules.

When you're ready to stop playing, play the "Make a Haiku" Black Card to end the game. This is the official ceremonial ending of a good game of Noisebridge Against Humanity, and this card should be reserved for the end. (Note: Haikus don't need to follow the 5-7-5 form. They just have to be read dramatically).

At any time, players may trade in an Awesome Point to return as many White Cards as they'd like to the deck and draw back up to ten.

For Pick 2s, all players draw an extra card before playing the hand to open up more options.

Every round, pick one random White Card from the pile and place it into play. This card belongs to an imaginary player named Rando Cardrissian, and if he wins the game, all players go home in a state of everlasting shame.

At any time, players may discard cards that they don't understand, but they must confess their ignorance to the group and suffer the resulting humiliation.