The tour will be blogged/vlogged on the Raspberry Pi website and we hope to attract Raspberry Pi enthusiasts and hackers/makers from across the areas we will be visiting, allowing us to meet and support our community.

The Noisebridge event will be very informal and will consist of the following;

Rob will be giving a demonstration of the latest developments with the Pi as well as bringing a number of Pi's for people to play with hands-on.

This will give people a great opportunity to get advice from the Foundation and get help kickstarting Pi-based projects.

Sadly due to sales and import tax restrictions we won't be able to sell Raspberry Pi's directly at Noisebridge. But you can buy a Raspberry Pi in advance -- Rob says that there is now plenty of stock at MCM Electronics (http://www.mcmelectronics.com/content/en-US/raspberry-pi).

Raspberry Pi: Past, Present & Future - An introduction to the Raspberry Pi, including an overview of its history and development, details on the technical specification and an outline of future developments. Followed by a Q&A session.

A chance for people who have started/completed projects based on the Pi to bring them along to do a show and tell, with prizes being given out for the most awesome ones shown.

Over 80 people came to the event. Smashing success! And lots of fun for all.
Thanks to Rob Bishop for coming by and showing off Raspberry Pi, and bringing Pi's for everyone to play with.
Thanks to Google for sharing the monitors, keyboards, and mouses. 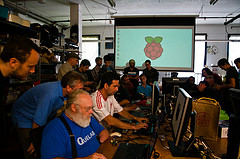